MiARD paper on the outflow from comet 67P

The latest publication from the MiARD project has just been published in the journal Icarus.

On deviations from free-radial outflow in the inner coma of comet 67P/Churyumov-Gerasimenko concerns the way material is transported away from the comet, and compares observations made with the OSIRIS camera to theoretical models of the outflow; the agreement between the models and the observations is good. At the time of writing this paper, the lead author, Selina-Barbara Gerig, was a masters student in the Planetary Imaging Group at the University of Bern. She is now pursuing a PhD, stil at the University of Bern. 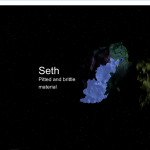 The dates are fixed, and invitations have been sent out, for the workshop to be held from 15th-19th January by the International Space Science Institute (ISSI) in Bern, Switzerland in conjunction with the MiARD project. The preliminary programme and futher details can be found at http://www.issibern.ch/workshops/post67p/

According to ISSI, the aims of the workshop are:

A number of papers arising from the workshop (and thus the MiARD project) will be published by Springer in the Space Sciences Series of ISSI, both in journal format and as a hard-cover book. We currently expect publication to take place in early 2019.

Unfortunately, a nearly-full moon will hamper observations of the Perseid meteor shower this year (close to 12th August) and the weather in north-west Europe is also not ideal. If you don’t see any Perseids this year, then you may wish to take a look at the International Meteor Organization’s calendar which lists all expected meteor shows for 2017 with comments as to the likely viewing conditions.

Meteor shows are in general due to dust particles shed by comets as they approached the sun on previous orbits. The Perseids are associated with comet Swift-Tuttle, a 27 km large body which last passed near Earth in 1992 and is not expected again until 2126. We see ‘shooting stars’ because the dust particles are traveling at about 60 km/s relative to the Earth, and this is fast enough that air friction heats the tiny dust particles to white heat in the upper atmosphere, about 90 km above us.

Space.com has posted a video showing early Perseids from this years shower, photographed by a NASA all-sky camera.