Have you ever wondered what a comet smells like? Some of the measurements from the ROSETTA mission can be used to partially answer this question. A mass spectrometer is a measurement instrument that can be thought of as being like an electronic nose – it identifies gaseous molecules. The ROSINA instrument onboard ROSETTA was a set of mass spectrometers and pressure gauges that ‘sniffed’ the gases emitted by the comet as it warmed up near the Sun.  Using this information it has been possible to recreate a sort of ‘perfume‘ that captures the characteristics of some of the molecules detected. This perfume has been used to scent some postcards – probably what brought you to this webpage. 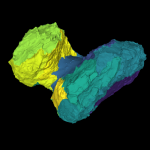 In real life it would not be advisable to attempt to ‘sniff’ the comet because some of the molecules detected are known to be poisonous (e.g. hydrogen sulfide, ammonia and even hydrogen cyanide) and because there is not enough atmosphere (nor oxygen) to breathe, even if we disregard the very low temperatures (well below – 50 Celsius).

Most of the molecules detected by ROSETTA/ROSINA are familiar to us and fairly innocuous e.g.

all of which come from the ices that make up most of the comet, but others are more aromatic or harmful, including:

A graphical grouping of the molecules detected, associated with different animals to aid the memory, has been created by the ROSINA team. Some of the more interesting molecules include glycine, an amino acid (cartoon explaining how ROSINA detected glycine) and the noble gases.