109 years ago today, there was a large explosion over a remote part of Siberia known as Tunguska, the result of what many think was an asteroid or comet that blew up in the Earth’s atmosphere. The explosion has been estimated to be 185 times more powerful than the atomic bomb dropped on Hiroshima in the second world war; trees were flattened upto 50 km from the blast centre, but no impact crater was found.

The BBC has a nice summary  in an article published last year of what happened, in non-technical language. 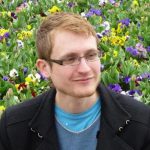 Nick works in the MiARD project on determining the physical and mechanical properties of comet 67P. In particular, he uses OSIRIS camera images from the Rosetta mission to analyse surface features, such as overhanging cliffs and fractures, to estimate the mechanical strength of the nucleus material. He also uses navigational and position data to measure the effects of outgassing on the comet’s orbit (an example of ‘non-gravitational forces’ affecting the comet’s orbit). The MiARD project seeks to develop a better model for ‘non-gravitational forces’ in order to be able to make better predictions of comets’ trajectories in future.

Within the MiARD project, the team members at Heriot-Watt University on Scotland are using terrestrial rocks as analogues for the porous material expected at the cometary surface when they carry out numerical simulations of gas flow through such porous material.
The link below is to a file from an X-ray computer tomography or ‘CT’ scan of a porous rock. (On some platforms the file will be viewable in your browser, on others you will have to download the file and use a viewer for .stl files, such as ‘Preview’ on Macintoshes or ‘Meshlab’ on Macintosh, Windows or Linux platforms.). The image is taken from the same file, and shows the extremely high porosity of this rock sample. Estimates of the porosity of the cometary surface vary, but it may be as high as 75%. 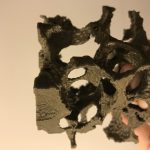